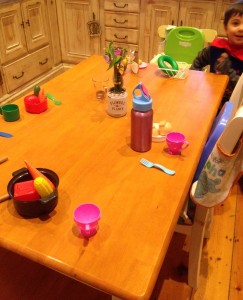 Every now and then you get this sense that the bar has been raised and what used to be acceptable isn’t acceptable any longer. We’ve seen it over the years with women’s body shapes, fashion, the standard of living and special effects (I’ve just been watching the original series of The X files). Anyway, it seems from the multitude of cooking shows, food blogs and social media food accounts that it’s occurred in the area of home cooking too. No longer are perfectly food styled and flavour balanced dishes the things you only see in glossy magazines or fancy restaurants but it seems like your neighbor, your sister in law and friends are now also serving up some kind of gourmet rendition of a family meal every night based on their social media news feed. It’s as though, while you’ve been watching Game of Thrones others have been secretly honing their knife skills like the Bennett girls in Pride and Prejudice and Zombies.

Years ago I had a friend who fancied themselves as a bit of a foodie and they’d tell me that the way I cooked meat was wrong (I haven’t cooked it at home for a number of years now, but in the rare occasions I do eat meat I prefer it well done. Very well done). I also had a boss who fancied himself as a wine snob tell me that I didn’t have a sophisticated palate because I preferred the taste of the $20 bottle of wine compared to the $200 one. It struck me as ridiculous in both instances that someone was telling me how I should like the taste of food. Call me rebellious but I think I should be allowed to cook food how I like it in my own home and I think you should too. This is one of the reasons I offer our recipes and episodes as ideas and always invite you to play with the recipe until it suits your tastebuds.

Just because everyone’s crazy about chia or quinoa, if it doesn’t work for your body or you don’t like the taste – don’t cook with it and if others don’t like the alternatives that you can eat and you like – well that is all that matters!

Being told how to cook in regards to health and safety (from food poisoning) is one thing – by all means, take the advice and listen to the experts on that one, but when it comes to the food you are serving at home don’t stress about making it perfect. If you’re one of those people who are naturally gifted and can’t help but make things look and taste absolutely fantastic by anyone’s standards – well that’s your cross to bear, but if you’re like the rest of us, and you don’t like adding salt to your meals, or you’re cooking without oil, or perhaps you’re eager to retrain your tastebuds but at the moment have a bit of a sweet tooth – then start from there.

I love watching cooking shows, I love the beautiful photography (obviously or I wouldn’t have produced one) and while, yes, it’s true to some degree that we do “eat with our eyes” and there will always be those recipes that taste better than they look (eg. tuna mornay) it’s important to remember that there is much more to nourishing yourself and your family with food, than cooking a meal which looks perfect, exotic or rustic enough to be photographed for the cover of a magazine.

So when I had a chat with Lisa Corduff a fellow real foodist about all things home and whole food cooking, I couldn’t resist asking her how she felt about this phenomenon.

P.S. if you want the chocolate chip cookie recipe Lisa talks about its right here.

And if you want my classic gluten, dairy, egg, soy and gelatine free cheesecake, then  check out the following episodes: The Cheesecake Episode, The Cheesecake Quickbite.