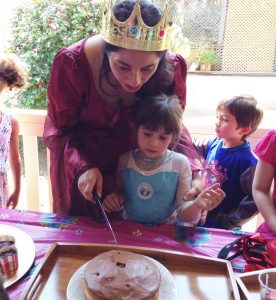 A few weeks ago I had to create a chocolate/ ganache/ icing recipe on the fly.  While it’s not something I generally recommend (because it can go wrong. very very wrong), sometimes it just happens that way.

You run out of time, and you’ve got a combo of ingredients, and you realise you didn’t buy any decorations for the cake and so you have to get creative and sadly I wasn’t going to be able to get away with spiderman for this one as it was a Frozen party.

So how did I create this icing?
Since I cook and think like a scientist and nutritionist (because that’s my training) rather than a real baker or chef, my explanations are going to be a bit different than you’d probably see in a baking book.

The sweet part of the icing

Instead of using icing sugar, I used rice malt syrup. The reason I went for a syrup rather than blitzing something like xylitol or coconut sugar is because I had an idea prior to this one that didn’t dissolve well enough and I didn’t have time to mess around, so I needed something for which dissolving wasn’t going to be an issue.

Making the icing set
Because rice malt syrup is a runny liquid rather than a solid (like icing sugar), I needed something that would help make the icing set and would also balance out the sweetness, so for this I used coconut oil. Coconut oil is one of those tricky ones. From chemistry 101 you might remember oils are liquids at room temperature while fats are solids. Well, coconut oil is actually an oil, but because of the high quantity of saturated fats in it it sets at cool temperature and so you can manipulate that trait in recipes to help it act as a setting agent (like we do in our Cheesecake episode).

Because the combo of coconut oil and rice malt syrup would give the appearance of a glaze more than a coloured icing, I stirred through some cacao powder to help make it a chocolatey icing (also the cacao, being a bit more bitter than something like, carob for example, also helps balance the sweetness out a bit).

Adding a bit more body to the icing
Lastly, I needed to help give the icing a bit more body and so using a trick I learned from Glenys in one of our up coming episodes, I used the flesh from a small mango.
I blitzed the whole combination up with the stick blender and then poured it onto the centre of the cake and used a butter knife to spread it around (I was hoping for a bit of the icicle dripping off the side effect considering it was a “Frozen” party. But I didn’t have time to practice getting that right – cake decorating isn’t my forte),
Because it was quite a warm day, I put the cake into the fridge to help the icing set and to help it hold together better once we brought it out (because the coconut oil will soften and melt depending on how warm it is, although the other ingredients helped it keep its form quite well). It is a relatively soft icing though. To make a “harder” icing you could add some cacao butter like I did in the everything free chocolate malteser pudding cake alternative.

Method
Add all the ingredients together in a jug and blend with a stick blender until smooth.
If you live in a cooler climate, don’t leave it to stand in the jug for too long before using as it’ll set in the jug.

Until next time, happy cooking!
Lisa
🙂