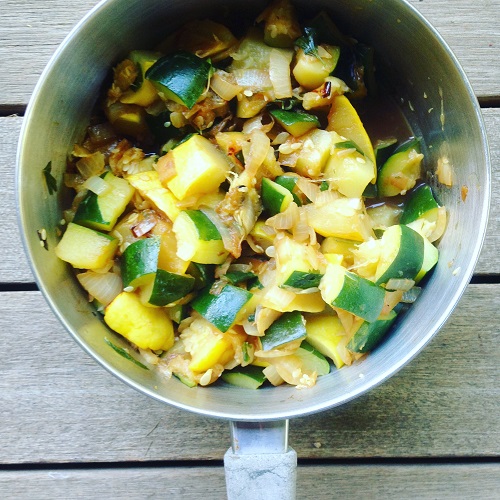 There are certain times of the year when you just feel like you’re inundated with zucchini. I’ve tried making various recipes over the years and recently I’ve come back to making this oddly named zucchini stew I used to love my mum cooking when I was a kid. It’s such a simple dish, but tastes really yummy and it’s quick to make.  Recently I asked my mum what I could call it in English as I only know it by the name mum calls it in our Italian dialect (which to be honest is totally phonetic and couldn’t even be spelt if I tried). Anyway, mum laughed and said it roughly translates to “Zucchini Purgatory” (there are a lot of these oddly named “traditional” recipes in our family;-)

So anyway, call it whatever you like: Zucchini Purgatory, or Zucchini Stew, this is what you need to make a batch:

We serve this as a side with left overs, eg. Flat dairy-free Pizza (you can get some recipe ideas in our Pizza episode too), and 4 Bean mix salad. While it’s not the kind of thing you’ll serve at a fancy dinner party, it’s one of those comforting “makes me think of mum” recipes. 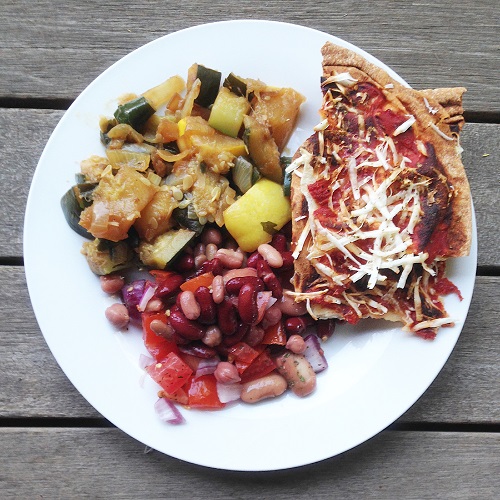 We’ve got so many oddly named recipes (mostly the odd names have evolved not just from our dialect, but from my brother in laws, sisters, nephews and kids changing the name over time… eg. Originals. No we aren’t talking about the TV show spinoff from the Vampire Diaries, it’s what we call zucchini fritters;-) We’ve also got Woofrit an evolved name for deep fried pizza dough 🙂

Do you have any oddly named recipes like this? We’d love to hear them and the stories behind them:-)

In the mean time, if you’d like more recipes and every day free-from family friendly food inspiration,  check out our recipe books:-).