A lot of the time a simple substitution in a recipe will work well, but other times it doesn’t. This is because the components of some of the alternative foods are different to the original foods used in the recipe. Eg. for a Bechamel style sauce the usual ingredients are cows milk, wheat flour and butter.

It’s the chemistry of those components interacting which makes the recipe work (or not work if you’ve made a substitution and got a “flop” or a less than palatable looking result). Most of the time, if you’re not a chef, but you’ve been cooking this way for a while, you’ll develop an intuition about what will work as a direct substitute and what won’t.

For those who are new to this though and who haven’t developed an intuition about this, I hope you enjoy this mini lesson.

I don’t have a chef background but I do have science (biology, chemistry, biochemistry and molecular biology) and nutrition background and so I tend to think about solving these cooking problems like a scientist.

So I have 2 approaches when I’m doing something new for the first time or trying to figure out why the simple substitution didn’t work ….

1) I look at the properties of the food in the original recipe – eg with Bechemel sauce, it’s creamy, it’s thick, it’s a white-ish colour because of the milk base.

2) I look at the properties of the individual ingredients in the recipe.

The easiest way to learn about what properties certain foods bring to recipes is to replace one ingredient at a time in a recipe. So to better understand the role that dairy milk has in making something like a bechamel style sauce, I did an experiment where I made a whole lot of sauces using different alternative milks. 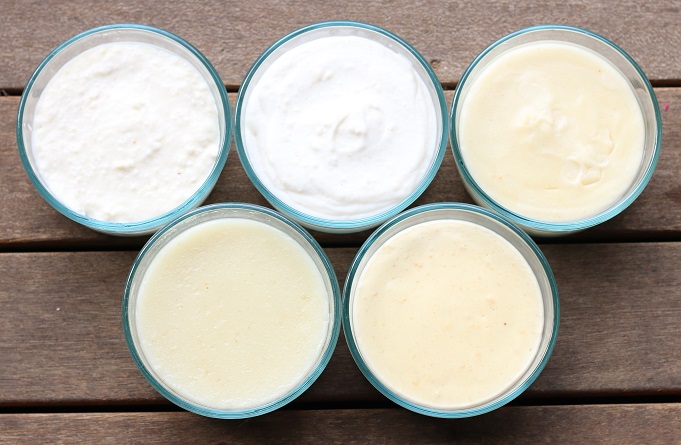 Thickness of the sauce

How yummy do they look?

Because “we eat with our eyes” how closely the alternative looks to the original (and if it doesn’t look like the original but still looks pretty delicious) is important. Out of the 5 milks the whitest sauces were also the thickest – eg. the almond, the coconut and almond, the rice milk with sunflower seeds. The plain rice milk, soy and oat milk were more of a cream colour than a bright white as you can see in the picture above.

1) Which alternatives are available for you are going to depend on the food intolerances you need to cook around (or dietary lifestyle choices like being vegan) and ultimately your taste buds will adapt to the alternative which is suitable for you.

2) Sometimes “bland” can be a good thing in an alternative recipe. Especially when it’s one component of a bigger meal. For example, Hayley’s zucchini lasagne are “plain” but it is perfect when you have it with the cashew cheese sauce, tomato sauce and the walnut mince. So if your alternative can tick 2/3 boxes then it can still work in the over all meal.

Each alternative milk has it’s own characteristic taste – for example, almond milk has a bit of a nutty “plain” taste to it, coconut milk has a specific “coconutty” flavour. Oat milk tastes “oaty” which is a little bit sweet but floury (think of porridge) but reasonably non-descript . Soy milk has a nutty flavour that is different to the almond and or the coconut milk . And rice milk tends to be a bit sweeter, though when you add the sunflower to it like I do in the Milk Episode you’ll find that it takes the edge off the sweetness.

On top of this, you’ll also find that if you’re using store bought milk alternatives each brand will have a different taste too – mostly as a result of the different ingredients that are added – for example Bon Soy, Pure Harvest and Vita Soy soy milk all taste different, as do Pure harvest and Vitasoy Rice or Vitasoy Rice (protein enriched with chickpeas). So how they ultimately work in your recipe will depend on which one you use.

So which milk alternatives can be substituted well for a bechamel style sauce?

The milk alternatives that work best (and which you choose will depend on your particular food intolerance need) are the almond milk, rice milk with sunflower seeds (or for a commercial equivalent – if it suited your diet Vitasoy Rice milk enriched with protein) and soy based milks.

Which one’s didn’t work so well and why?

From a taste perspective, the coconutty flavour of the coconut milk based sauce was out of place in the lasagne. And depending on how strongly flavoured the bolognese sauce would be, the almond flavour of the almond milk might stand out too much for some people too. From the appearance perspective, the oat and plain rice milk were the least appealing.

The reason the plain rice milk and plain oat milk don’t look as appetising as the others is because they have the lowest fat and protein contents compared to the other milk alternatives and compared to cows milk. So the fat and the protein in the cows milk is part of what helps it keep the flour and the oil creamy when you add the milk to the mix. When you use a low fat and low protein milk like a grain based milk the oil comes “out of solution” when you’re bringing it to the boil. 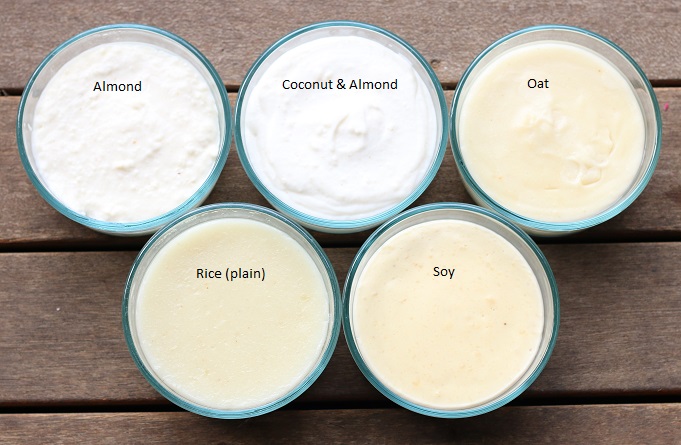 While alternative cooking isn’t rocket science (it’s nutrition with a bit of chemistry and physics) there are some little tips and tricks that can help make the cooking journey easier. To get more of our tips, check out our Episodes and Books.